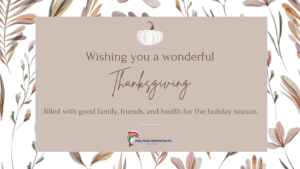 This Thanksgiving, I wanted to take a moment to reflect on the year and express gratitude for each of you. 2020 has certainly challenged us in ways we didn’t think possible last year. But, your resilience during the Covid-19 crisis, your responsibility for health and safety, and your dedication to our organization continue to inspire me.

Your determination has allowed us to accomplish so much despite the difficulties and uncertainty we faced. You attended meetings, helped with voter registration, phone banked, and more. Thank you so much for being part of the Dolphin Democrats family.

I am honored to serve as your president. And, I’m grateful for all the energy you continue to bring  to this organization and for your commitment to building justice and equity in Broward County.

Have a happy and safe Thanksgiving. 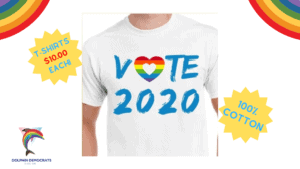 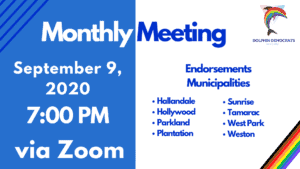 Join us for our September Membership Meeting.

You can read the questionnaires HERE 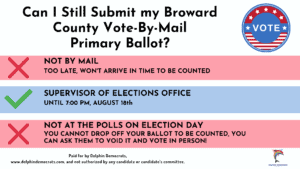 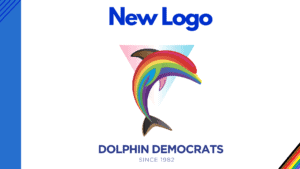 The Dolphin Democrats Board of Directors is  excited to announce and present the organization’s updated logo.

We wish that when any LGBTQ+ person whether they are a Democrats or just part of the community at-large sees this logo, they feel represented and hopefully get encouraged to join us in the fight for equality and continue the legacy of those before us.

We would like to thank the talented Landon St. Gordon for designing the log and Mike Worley at MDWCOMM ( https://mdwcommunications.com/) for their contribution to our organization. We will be forever grateful. 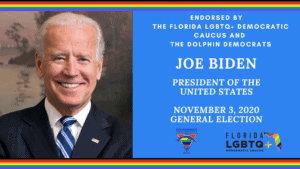 As of today, Former Vice President Joe Biden has surpassed the 1991 delegates to claim the nomination on the first ballot of the Democratic Convention. 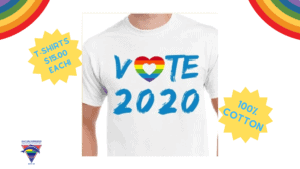 For a limited time you can use Promo Code LGBTQ2020 to get $5 off your purchase. 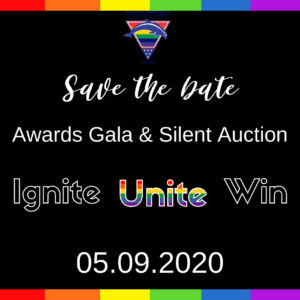 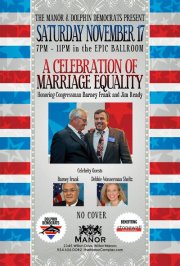 Our next meeting will be held on Wednesday, May13,  2012 at the Pride Center at Equality Park 2040 A North Dixie Highway, Wilton Manors, FL
7:00 pm – FREE pizza and soft drinks hosted by Howard Forman
7:30 pm – Program starts.
From Our President, Tim Ross
On May 22, I sent out a letter to the remaining 25 mayors in Broward county who  had not signed the  Mayors for the Freedom to Marry Statement asking them to sign the statement.  Since they live in Davie, I also asked Dolphin Democrats members and longtime partners Gary Hensley and Bob Bernhardt to approach Davie Mayor  Judy Paul on the issue.  I am proud to announce that Gary and Bob have informed me that Judy Paul has signed the Mayors for the Freedom to Marry Statement.  In addition Mayor Marilyn Gerber of Coconut Creek, and Mayor Mike Ryan of Sunrise have also signed the statement.
At this time, I would like to offer my heartfelt thanks to Mayor Marilyn Gerber of Coconut Creek, Mayor  Judy Paul  of Davie, and Mayor Mike Ryan of Sunrise for their support of Marriage Equality.    Marriage matters to LGBT people in similar ways that it matters to everyone.  Gay and lesbian couples want to marry, make a lifetime commitment to one another, and protect their families. Marriage says “We are family” in a way that no other word does. It is one of the few times that people make a public promise of love and responsibility for each other and ask friends and family to hold us accountable.  It’s as basic as the Golden Rule.  Marriage strengthens families, and it provides couples with the tools to build an enriched and secure life for themselves and for their families.  Thank you for affirming that we are family in time for us to celebrate your support during June, which is Gay Pride Month.
This month, I will be asking other Dolphin Democrat members in committed relationships to contact their mayors who have not yet signed the statement.  I hope to make more announcements as the month progresses.
Thanks,
Tim Ross
President
The Dolphin Democrats
Letter to Jack Seiler Regarding His Comments on Marriage Equality
Hon. John Seiler, Mayor
City of Ft. Lauderdale
City Hall
100 North Andrews Avenue
Ft. Lauderdale, FL 33301
March 21, 2012
RE: Sun-Sentinel Article “Mayors back gay marriage”
Dear Mayor Seiler:
I write to you on behalf of the members of the Dolphin Democratic Club, and for those who believe in equality and justice for all.  In a March 10, 2012 article in the Sun-Sentinel newspaper, several mayors of municipalities within Broward County are quoted as endorsing equal rights for all humans, including the right of marriage, regardless of a person’s sexual orientation. Mayor Frank Ortis of Pembroke Pines, Mayor Lori Moseley of Miramar, and Mayor Joy Cooper of Hallandale Beach all joined in supporting marriage equality. Your name, however, was conspicuously missing from the list of supporters.  The LGBT community continues to fight the battle for equality, and as Mayor of a city that possesses one of the highest concentrations of LGBT members in the country, people look to you to champion for all people that you represent. Your quoted comments made it appear as if the LGBT community should be happy with domestic partnership benefits and appointments to volunteer city advisory boards. Are you kidding?
In the on-line version of the Sun-Sentinel story, you go on to say that because state law does not allow for gay marriage, the subject is moot and it just wasn’t something you intended to spend much time thinking about. Mr. Mayor, I remind you that this state used to restrict the rights of African-Americans, Jews, Native Americans and many others, and if it were not for the courage and moral fortitude of our leaders, we would still be living in a society that denies equal rights to these Americans.   Through your statements, you have clearly abdicated your role as a responsible leader by dismissing a large segment of your constituency to second-class status. I believe that all members of the LGBT community and those who possess a progressive mind find your statements unacceptable.  Adding to this, you once again failed to appear at the recent annual gay-pride event which was held at Ft. Lauderdale’s Holiday Park. We are not sure why you haven’t spent much time considering the issue of equal rights for everyone, but we do know that achieving equality is a challenge that must engage all segments of our community, and certainly our elected officials must lead the charge.
If you believe that your words were misconstrued or taken out of context, we invite you to our Club meeting to explain your position so that there is no misunderstanding. Our relationship with you has always been supportive and cordial, and we hope that we can be assured of your continued support of our community. The LGBT community will only stand behind those who share our vision of equality, and we will not accept a secondary role in our society.  We look forward to hearing from you.
Very truly yours,
TIMOTHY A. ROSS, President
VOTE BY MAIL 2012–2014
ALL BROWARD VOTERS NEED TO REAPPLY
Voters who wish to cast their ballots by mail may make a single request to get absentee ballots for every election through 2012. Absentee ballots no longer need a reason.  People can use them if they prefer to vote by mail. Broward voters who want absentee ballots, either for a single election or for multiple elections, need to request them from the Supervisor of Elections Office.  Requests can be made in person, by mail, by phone or by filling out an application online. Call 954-357-7055 for details or applyonline here.
* Online requests are only for 1 year
* Phone requests can be for every election through 2014.